In the online Dialogue "Astronomy - a Unique Educational Tool for furthering the SDGs and Stimulating a Global Perspective" in the context of the United Nation's 75th anniversary, the International Astronomical Union (IAU) launches a new global citizenship initiative at the United Nations. The event featured a key opening address from South African Minister Naledi Pandor. 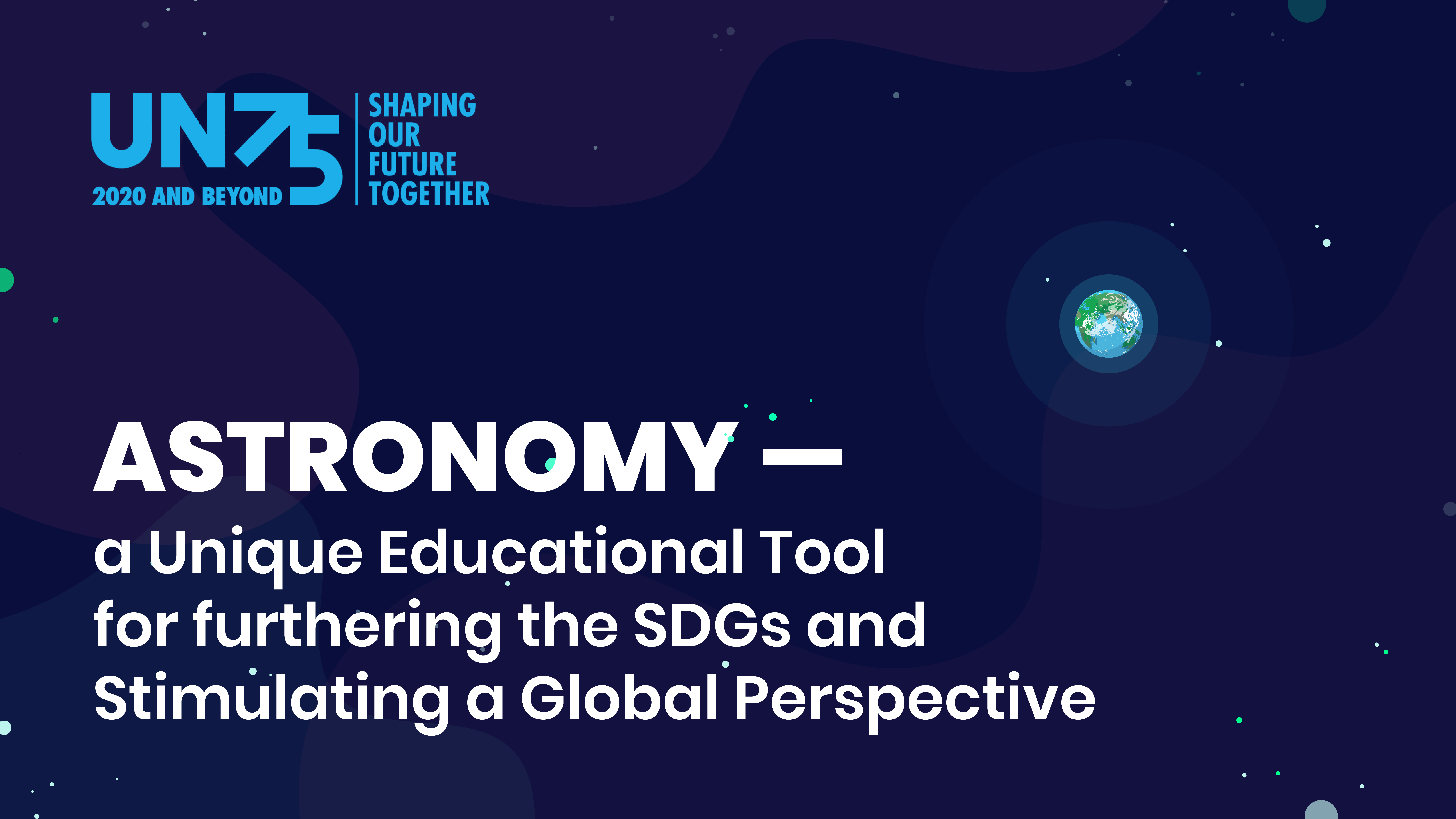 You can read the summary report of the dialogue here.

The IAU E-ROAD has just reported to the United Nations Secretary-General about a virtual UN GA75 Dialogue held on 28th September during the 75th General Assembly. The UN GA 75 Dialogues are intended to solicit ideas that could make the world a better place before the 100th anniversary of the birth of the United Nations in 2045. The IAU Dialogue focused on whether introducing young children to the enormity and beauty of the Universe can foster an increased sense of globalism and solidarity and advance the Sustainable Development Goals (SDGs).

The 12 speakers included astronomers, educationalists, social scientists, economists, politicians and government leaders, and highlighted videos from children all across the world. The unanimous conclusion was to work towards the adoption of the following resolution by the General Assembly:

“Before they are 10 years old, every child should be introduced to the inspiring notion that we all inhabit a tiny planet in a vast and wonderful Universe, illustrated by the iconic pictures of our Earth taken from space. This will help them realise that we all belong to a common humanity (SDG 4.7), who must respect and protect our planet (SDG 13) and advance the cause of peace (SDG 16)"

A highlight was an inspirational keynote address by South African Foreign Minister Naledi Pandor, who is an honorary professor of Astronomy for Development at Leiden University, the Netherlands. She thanked the United Nations for allowing a side event of such calibre to take place. She said that astronomy was chosen as a priority science by South Africa because of its unparalleled ability to inspire an interest in science, especially among young people. According to Professor Pandor, South Africa “recognised the unrivalled potential of astronomy to develop generic, mathematical, computational and other technological skills which would be needed for the African knowledge economy”. “I have no doubt”, she said, “that South Africa’s president, Mr Cyril Ramaphosa will appreciate and support your efforts to highlight and to use astronomy as a tool to bring our world together at a time when there are many in the world who seek to divide us and to entrench divisions. President Nelson Mandela famously stated that there can be no keener revelation of a society's soul than the way in which it treats its children. You can count on the support of South Africa in advancing the goals that will emerge from this side meeting.”

Irish MEP Barry Andrews, a member of the European Parliamentary Delegation for Relations with South Africa, said that support for education is a priority that the Irish government hopes to bring to the table when Ireland joins the UN Security Council in 2021. “Projects that give young people a sense of global citizenship and an interest in science and technology should be supported and encouraged.”

The report, unanimously agreed to by all participants, requests the UN Secretary-General to intensify discussions with national governments, industry and philanthropic organisations about the importance of globalism in their education programmes and specifically to advance the vision of the IAU Dialogue within the 2030 Agenda for Sustainable Development. A multidisciplinary global educational initiative should be launched, possibly under auspices of the UNESCO Global Citizenship Education programme, that would help advance a sense of globalism by introducing young children to a cosmic perspective. It would combine top-down and bottom-up approaches, distributing and translating relevant educational resources, adapted to local national and cultural needs, with attention to ensuring gender equality. Where appropriate, the programme should also include online tools and training for teachers in explaining the cosmic perspective and its implication for global citizenship. Pilot projects should first be set up in diverse environments throughout the world. These pilots and the programme as a whole would also be an international research platform for investigating the long-term effect of exposing young children to the wonder and enormity of the Universe.

Bolstered by political support from the high-level speakers at the Dialogue, the IAU Office of Astronomy for Development and its 11 regional offices will intensify efforts at the UN and among UN member states to ensure that the vision of advancing globalism by introducing all young children to a cosmic perspective is achieved.

The IAU UN GA75 Dialogue was organised by the IAU E-ROAD and within the African-European Radio Astronomy Platform (AERAP) ScienceDigital@UNGA75 programme.

This is a recording of the live Dialogue, the event starts at 1:28 minutes into the video.

Below you can watch the opening address by South African Foreign Minister, Naledi Pandor, or you can read a brief summary here.